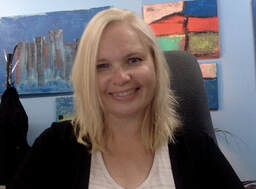 The weekend after I discovered My Felt Doll by Shelly Down in my local public library, I was so enchanted that I rushed out to Michael's to stock up on felt, embroidery thread, yarn, and a big bag of stuffing. Something about the faces of those sweet dolls compelled me to jump headfirst into the hobby of dollmaking.

A few months into this hobby I decided to try my hand at making cloth dolls and was forced to concede that sewing cloth doll body parts by hand  was getting to be kind of excruciating. I headed over to the local Canadian Tire and picked up the Singer Stylist 7258 sewing machine: a great choice for a wary novice who hasn't sewn anything (beyond button reinforcement) since home ec. class in grade eight. YouTube videos helped me get the hang of learning how to thread the machine and wind the bobbin, and I quickly became able to whip through the body parts of a doll in about fifteen minutes.

Since that weekend (which feels forever ago), dollmaking has been a passion in my life ... and every doll that comes out of my workshop is hand crafted with its own unique touches so that no two are ever alike. To anyone who buys a ChesterMolly doll, I would like to say thank you, with the sincere hope that my creation will give you or your loved ones much joy.